Skopelos is located in the western part of the Aegean Sea and one of the most important part of Greece Tours. This islands is juts one of many islands that make up the Northern Sporades, which is a small cluster of islands in that region. The island itself is located to the east looking from the mainland. The Municipality and the main port of the island is Skopelos. The other main towns there are Glossa and Neo Klima/Elios. The island of Skopelos includes two mountains over 500 meters tall. The Delphi and the Palouki in the south east. The closest inhabitable islands are the Skiathos and the Alonissos. 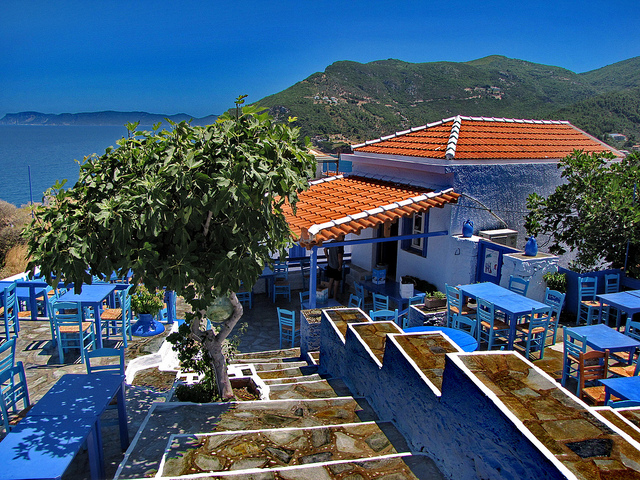 Many people flock to the summer island for vacation but many people actually go to Skopelos to retire. Their economy is very dependent on tourism industry which supports many other industries as well. Agriculture was a very important part of the economy has had some very difficult years and in 2006, it turned slightly around, the olive oil manufacturing on Skopelos did very well. Though wine was a big product over time local grapes that were being used began to fade out.

Goat and sheep herding is still happens and with goat milk, they can produce cheese and beekeeping and honey are becoming increasingly popular over the most recent years. Most islands tend to do well fishing and Skopelos is no exception, they do well enough to keep on doing it.

Any family money that comes into play here is from what they call a matrilineal society and that means that the money and wealth are passed down through the women family line. It is customary that the parents of the skopelitan bride buy a home and some property for the newly married couple. The home and the property stay in the bride’s name.

The environment on Skopelos is made up of Aleppo pines, holly oak and Holm oaks. There are many olives groves and fruit tress as well. There used to be pine trees on Skopelos but they have long since been replaced by oak. This island is one of the greenest islands among all Greek Islands. But the island is a little behind the times when it comes to recycling, right now the island has no recycle program tied to it. The solid and the hazardous waste is put in a landfill and then removed from the island. Hotels and some homes are able to use cesspools for their waste.

The island of Skopelos has a wide range of flowers, trees and around 700 species of wildlife. There is about 66 types of fauna and 66 species of wild birds, some are native to the island and some migrate over. Some of them are considered birds of prey such as Elenora Falcon, Eagles and Vultures have been seen from time to time as well. There are many ways to get around on Skopelos, there are more cars there today than 10 years ago. Therefore the traffic and parking cases are a little out there. There are rental cars to get you around as well as taxi cabs and buses. In some places you may wish to get around on mopeds. It may be faster.